The Dead Eye and The Deep Blue Sea is a raw and detailed story of Vannak Anan Prum’s experience as a slave on a Thai fishing boat. 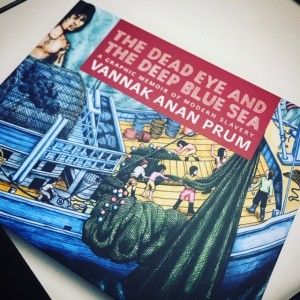 Vannak has drawn all his life. As a child in a small village in Cambodia during the period Vietnam and the Khmer Rouge were warring for the control of Cambodia, he entertained himself drawing pictures in the dirt surrounding his home. With little ability to read and write, this drawing skill became the method by which he shared his slavery story with the world.

With a baby on the way, and little money from the work Vannak could find in his village, he heard of an opportunity to work in a fish drying factory in Thailand. Promised that the ‘middle man’ would pay when he arrived, he was told that he would have to repay the costs with his first month’s salary.

But that is not the way that it occurred. Smuggled across the border and led on to a boat, he became trapped on the high seas without seeing land for another 3 years and 7 months. With little to eat, witnessing brutal beatings, and even murder, Vannak is unfortunately just one tale of many of men trapped in grueling work on fishing boats in South East Asia.

The Walk Free Foundation estimates that 40.3 million people are trapped in slavery  globally, however given the hidden nature of the issue, the number is likely grossly understated. Vannak’s story is a common one, where a person from a disadvantaged community is tricked into work abroad and once there they are not paid and have little resources available to help them.

Slavery touches many of our household items, some of the highest risk commodities are seafood, chocolate, cotton, and electronics. As consumers we can make choices to buy items that have an independent certification such as Fairtrade or Rainforest Alliance, these certifications require brands demonstrate significant efforts to have made their products with ethically sourced materials. However boycotting is not the answer. For brands who do not yet make ethical sourcing a priority we can write to them or contact them on social media asking for change.

Vannak’s story did have a happy ending, but not right away. After escaping the boat and swimming to Malaysia, the authorities in Malaysia sold him again to an oil plantation for another year. He was eventually released and found his way back to Cambodia and back to his family.

His book is available at bookstores in Australia, or you can contact the book sellers through the Dead Eye and the Deep Blue Sea Facebook page.

Stop the Traffik – campaigners against social harms in the supply chain