Are Child Slaves Making Your Chocolate?

Chocolate has become one of the biggest hot button ethical sourcing issues in the last 15 years due to the widespread use of child labour in the Western African locations that supply the majority share of the world’s cocoa.  It sounds far from home to us here in Australia, but let me share with you some staggering statistics. In July, Tulane University released a research report commissioned by the US Department of Labour on child labour in the cocoa industry, with the finding that there are still 3.73 million labourers aged 5-17 working in the cocoa fields of Cote d’Ivoire alone, an increase of 5% since the previous report commission in 2008/09.

Let me write that again in a different way in case it was such a big number it didn’t sink in - nearly four million children working in the cocoa fields supplying the lion share of the world’s cocoa.

If you eat chocolate, the issue is not far from home. 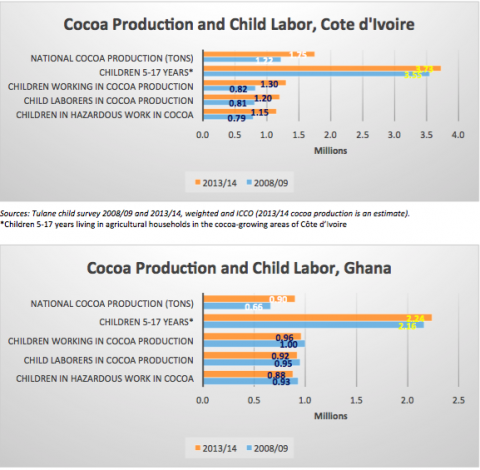 Told you it was staggering… We are going to break it down for you – how the problem exists, what has been done to date to tackle the issue and what we can all do to support change.

So what’s the problem?

The majority of the world’s cocoa is sourced from Cote d’Ivoire and from Ghana where child labour is utilised in the harvesting and the processing of cocoa. Boys as young as six are trafficked - which means kidnapped, sold or traded  - to work on cocoa fields. Such practices might sound rare and unlikely to us, but unfortunately not. The way it works is that agents go into poor villages and they trick parents telling them they are offering support to take the kids away to school. Or sometimes they are just snatched.

The reason why child labour is used is simply because of the expense of a very manual harvesting process. The cocoa pod must be cut very precisely or it won’t produce another cocoa pod, therefore the process can’t be automated. Once harvested, the first stages of processing need to then be done there in-situ.

The root of the issue stems back even further – in the 1980s when the world had a campaign to forgive the debt of some of the worlds poorest nations, the gift came with strings attached. The debt was forgiven on the condition that exports were not to have tariffs applied, making it very difficult for local industries to produce product at the same prices as before. Quite simply, we don’t pay the farmers enough for the product to earn enough out of a cocoa crop to pay adult workers.

In recent times Ghana has outlawed child labour in the cocoa industry, though it is still wide spread in Cote d’Ivoire, and evidence shows trafficking across the Ghana border into Cote d’Ivoire still exists.

What’s been done to date?

This issue was brought out on to the world stage in 2001 when the stories became quite public and CNN released a graphic documentary about it. Horrified by what they saw, two American congressmen put forward a motion to congress that chocolate companies would have to put a mark or a message on their bars to say that they had traced the materials and were sure that trafficked child labour wasn’t used in harvesting the cocoa. The motion was not successful and instead the result was what is now known as the Harkin-Engel protocol, an agreement between representatives of US Congress, Cote d’Ivoire, Ghana and heads of the eight of the largest confectionary companies.

The protocol laid out a series of actions with specific deadlines, but only for the worst forms of child labour and trafficking, it is also non-binding for the cocoa industry, essentially allowing them to regulate themselves without any legal ramifications.

Not for profit organisation ‘Stop the traffik’ started campaigning the confectionary companies in 2007, asking them to be ethically certified using one of the three major certification standards, UTZ, Fair Trade or Rainforest Alliance. In the time since then some progress has been made and a number of iconic brands do carry certification.

It’s fairly widely accepted in the industry now that child labour in the harvesting of cocoa is a problem and each of the major producers have their own cocoa plan located on their websites. There are 5 major companies controlling the confectionary industry– Mars, Nestle, Hershey, Mondelez, and Ferrero Rocher. According to Carolyn Kitto, co-director of ‘Stop the Traffik’ in Australia, Nestle is the organisation making the greatest advances and Mondalez are still dragging their feet. ‘We know that this is still going on’, Carolyn says, ‘We have been there to Cote d’Ivoire and talked with children who have been rescued from this practice ourselves’.

In a major demonstration of the role our retailers can play, just recently Aldi made the commitment to stock only certified chocolate in their stores.

The table below shows each of the 5 major players, their brands and progress in ethical sourcing:

Why aren’t we as consumers outraged?

Carolyn Kito said to us, “I’m still stunned by the number of people who don’t know about this issue. It has been widely known in the world since 2001 but still it doesn’t get talked about amongst the general public or reported on in the mainstream media.”

Perhaps we just didn’t know. Perhaps we don’t want to know because it makes us feel like we need to take responsibility, but are powerless. Quite the contrary, consumers are the ones with the all power. Making mindful choices about the chocolate we buy will drive change on the part of the producers. Being prepared to pay just a little bit more for our chocolate to account for fair prices of raw materials. Confectionary manufacturers’ marketing and supply chain departments catch on pretty quickly as our demands shift.

If this is overwhelming, you can to committing to just one of the actions below. You can make the decision to only buy chocolate that is ethically certified, a range of options are now available.

But even with the global alliances, action plans, and investment in local industry support over the last 15 years the progress is most starkly demonstrated by the Tulane University statistics. For all the efforts, the dial is just not shifting. All the best laid plans are a good start but the true success can only be measured in actual numbers of child labourers still on the ground. The Tulane report states that in order to reach anywhere near the 2020 100% certification target, 1.5 million children still need to be removed from hazardous work. To do this, considering the growing increase in global demand for product, production methods or child labour mitigation strategies need to change drastically and rapidly.

One journey to ethical certification – an interview with Haighs Chocolates