Ethical buyers are daggy...aren't they? 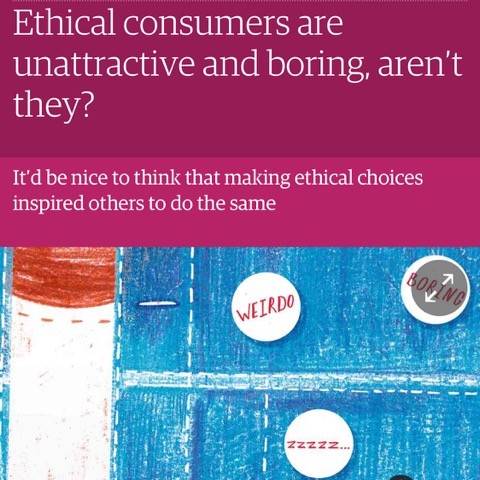 One of my colleauges sent me a very interesting and entertaining article last week from the Guardian – ‘ethical consumers are unattractive and boring, aren’t they?’

It would be nice to think that making ethical choices might inspire others to do the same but as some US researchers found, apparently it has the opposite effect. The researchers conducted a study where a group of consumers were asked when buying jeans if they could only know two of the following: price, style colour, and if child labour was involved, which would they choose. For those who selected not to know about child labour, that group was asked to rate the group who would – and found them to be boring, unattractive and odd.

Doing the work that I do, I have pondered this too.  On my trip to India in January I had a piece published in an American online journal about human trafficking and what can be done about it, which had a paltry number of readership. In the same month I published a piece about narcissism and when I checked the reader stats in the morning I was so surprised I thought the numbers must be wrong – 35,000 views overnight, and over the next few days exceeded 117,000 hits. I thought, maybe I should have hidden the human trafficking message subliminally somewhere in my article about narcissism…

The point of the Guardian article though, was not to shame those who were disinterested in child labour when buying jeans, it was to explore why. The researchers used social comparison theory to offer an explanation. Non-ethical shoppers know that they should care about child labour but they don’t want to think about it so they judge those who do. Interestingly when they are given the opportunity to make a donation to a charity of their choice and then re-rate the other participants their responses changed. “they had the chance to shore up their own ethical identity, so didn’t experience the same sense of threat”.

It’s easy to understand how this could be the case. We are bombarded with images of global warming, animal welfare, refugee issues. It’s hard to know where to put your focus and what actions we can do in our own little pockets of the world to effect change. There are two ways you can make these negative feelings go away, you can find a way to take action or you can choose to not look at it. As quoted in the article, you can deal with cruelty to animals by becoming vegetarian or by avoiding vegetarians who go on and on about factory farming.

It is changing though. New generations of consumers and new generations of employees have a different view on the way we use poverty and the environment  in the production of goods. A recent Deloitte survey found that by 2025, 75% of the global workforce will be millennials. Milennials are a group born between 1982 and 2000, and have been labelled by preceding generations as entitled, self-indulgent and selfie-obsessed, but the data shows they are significantly more engaged with sustainability and social justice than previous generations. Seeing beyond financial reward and status, millennials are looking for purpose, sustainability and social impact when it comes to the brands they buy and the brands they work for.

What does this mean then? I actually don’t know. I’m enjoying being an observer though having been a blinkered corporate-person-turned-ethical-business-and-consumer-minded person myself… One thing is sure that if we are to continue living in this world in a sustainable way then something has to change. I’m putting high hopes on the milennials and their sustainability and social justice minds.

You can read the guardian article here and the Deloitte survey here.

Tags:
Ethical Consumers The Guardian
That day my friend stood trial for murder...
Slavery is back in the news again lately