This year the Melbourne film festival dove deep into the heart of an issue that currently baffles the Australian business community. Modern Slavery.

The film #buoyancy, screened during the #MIFF2019, is a powerful depiction of life at sea for fisherman trapped on a trawler in the Gulf of Thailand. It brought a team of people together from very different walks of life to discuss the issue with audiences. 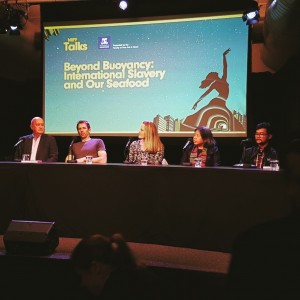 After a first screening at the Berlin film festival, the film producers decided to form a panel to discuss the issues surrounding slavery and the seafood sector when screening at the Melbourne Film Festival. In support of that, the MIFF talk ‘Beyond buoyancy, slavery and our seafood’ was formed with Ruthjen alongside slavery survivor Vannak Annan Prum, CEO of Konica Minolta Dr David Cooke, and myself.

I can’t begin to tell you what it is like to sit alongside a slavery survivor. Vannak, originally from Cambodia, was enslaved on a fishing boat for 3 years and 7 months and did not touch land during that time. When he did eventually jump from the ship while it was docked for repairs, he swam to Malaysia where he was imprisoned and eventually was sold again to an oil palm plantation. 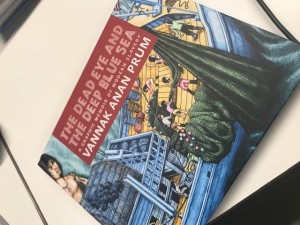 The film’s writer and director, Rodd Rathjen, read of the plight of workers in the fishing industry and felt the need to give those affected a voice and to tell the story to raise awareness. Though a fictional story, it is based on interviews with dozens of survivors who have been trafficked from countries surrounding Thailand to work on boats, often not touching land for a number of years.

Those of us who have done consulting and research work into the seafood sector understand the potential for labour abuses on fishing boats well. But even still I was quite unprepared to witness the brutality and the criminality portrayed by Buoyancy. 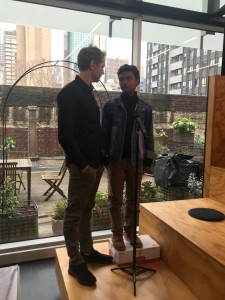 In a way, Thailand is an accidental incubator for these kind of work abuses. Thailand is a fast developing country with low unemployment, Thai nationals now have options for employment – better options than the dirty work on fishing boats or in processing factories. This creates an opportunity for agents to travel across the border to disadvantaged communities in neighbouring Myanmar and Cambodia, promising unsuspecting men and boys lucrative employment, and once across the border and on a boat, they are trapped.

What actually is modern slavery?

David Cooke and myself were invited to join discussions at the film festival and to bring the business perspective to slavery discussions, to demystify terms like modern slavery and supply chains.

No business leader ever set a business strategy to utilise slaves to reduce cost. However, the biggest input cost to manufacturing is labour, and to reduce that input cost we moved operations offshore to take advantage cheaper labour. By globalising our supply chains and offshoring operations we have unwittingly utilised the existence of slavery and labour abuses.

When we talk about slavery, we aren’t talking about low wages or poor working conditions, what we are talking about is where a worker has their freedom of movement taken away. Sometimes it is through threats of violence or through incarceration, but not necessarily. What happens most regularly is what is known as ‘debt bondage’, where a vulnerable person is promised employment (usually abroad in a wealthier country or city), their expenses are paid, and then once in the job their freedom of movement and often their identity papers are taken away they are forced to work without pay. The industries most likely to have this kind of worker in their supply chains is seafood, coffee, chocolate, apparel and electronics.

Being the Australian CEO of an electronics company, David Cooke is well aware of the dangers in his supply chain. Funnily enough, it was a business trip to Thailand and an encounter with a tourist who recounted a story of climbing aboard a fishing vessel ‘for a look around’, and seeing a man with a chain around his neck aboard the board, that woke him up to the issue. With David at the helm, Konica Minolta has been one of the first movers in implementing sustainable procurement practices and mapping their supply chain, as well as being very vocal in favour of modern slavery legislation in Australia.

And what can we do?

The answer is not to boycott the fishing industry in South-East Asia, or any other country where human rights abuses exist. The answer is in fact the opposite. When we source from these countries and we use our buying power to influence local producers we can drive improvements on a huge scale. We can already see this in the apparel industry, after the Rana Plaza collapsed in Bangladesh in 2013, global outcry about working conditions drove the fire and safety accord which lifted the standards of the entire industry.

One thing we can do is to purchase goods that have an independent certification. There are 3 major certifiers, FairTrade, Rainforest Alliance and UTZ. In the seafood industry the major certifier is Marine Stewardship council (MSC) however their focus is on environmental impact rather than on social sustainability issues such as modern slavery.

Modern slavery legislation was passed in Australia in 2018 and companies are now forced to look further than their suppliers, to their suppliers’ suppliers and beyond. Companies now need to see all the raw materials that go into their suppliers’ production as their responsibility in mitigating slavery risk. However, we are slow in starting this journey and we are still on the way to developing business systems to gain visibility of what suppliers are in the supply network and where raw materials come from. What we can do as consumers is to write to your favourite brands and ask them to implement business practices to have a transparent supply chain, that can identify and eliminate slavery risk.

After 3 years and 7 months enslaved on a fishing boat, four months in the oil plantation and 8 months in a Malaysian prison Vannak was eventually freed from slavery in 2010 and returned to Cambodia. He uses his survival story to raise awareness worldwide, and to educate vulnerable communities to the tricks and dangers of human trafficking and slavery.

Buoyancy will be released in cinemas in late September 2019.